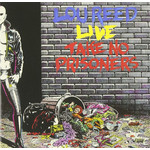 Provocation has been one of Lou Reed's primary motives from the start, and few albums demonstrate that characteristic as well as Take No Prisoners.

Recorded live at New York's Bottom Line cabaret at the height of punk, Take No Prisoners finds Reed lashing out at his audience and critics in a series of explosive monologues, set against the backdrop of some of his greatest hits.

Part comedy, part epic rock theatre, it's as unsettling as it is entertaining. Regarded by many fans as one of Reed's boldest artistic statements, Take No Prisoners has finally been released on double CD.