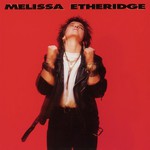 Her 1988 self-titled album was a passionate rock affair with her distinctive vocals, often compared to Janis Joplin. The common thread that links all infectious uptempo songs; emotional difficulties of relationships, love, romance but also an independent spirit for a young woman. The album peaked at #22 on the Billboard 200 album chart and the first single "Bring Me Some Water" was nominated for a Grammy Award for Best Rock Vocal Performance, Female.

The Music On Vinyl re-issue celebrates the 30th Anniversary of the original album and is pressed on red vinyl in a limited run of 1.500 individually numbered copies.