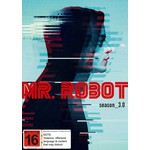 Young, anti-social computer programmer Elliot (Rami Malek) works as a cybersecurity engineer during the day, but at night he is a vigilante hacker. He is recruited by the mysterious leader of an underground group of hackers to join their organization. Elliot's task? Help bring down corporate America, including the company he is paid to protect, which presents him with a moral dilemma. Although he works for a corporation, his personal beliefs make it hard to resist the urge to take down the heads of multinational companies that he believes are running -- and ruining -- the world.

"Reality, as we know it, is frightening. But as viewed through the lens of "Mr. Robot," Esmail makes the fictionalized version of our increasingly dystopic existence palatable, even exciting." - Salon.com

"Season 3 of Mr. Robot is a masterpiece, ballasting the global ambitions of season 2 while sharpening back to the meticulous build of season 1." - Entertainment Weekly

"If you are willing to engage, willing to challenge yourself, it's some of the most fascinating television happening right now. Though given the past two seasons, that's hardly at all a twist." - IndieWire