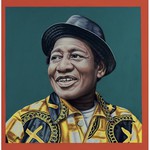 The 82-year-old composer, arranger, guitarist and vocalist has been a key figure in the evolving afro-funk sound since the 70's, working with the likes of Apagya Show Band, CK Mann and Pat Thomas.

Listen to Yen Ara and you will not only hear the high-energy afrobeat, sweet highlife, jazz and konkoma influences that he's famous for, there is also a disco pulse and hard-hitting percussive edge to the tracks, which were produced by Justin Adams (Tinariwen, Rachid Taha, Robert Plant).