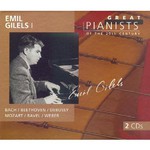 "I thought I would be mourning the omission of Gilels's Liszt Sonata from this series, or indeed his Shostakovich Second Sonata, or his Grieg Lyric Pieces, his Beethoven sonatas, his Brahms ... but the sheer quality of this second instalment (see 10/98 for my review of the first) silences such thoughts. 'Indispensable ... definitive': my fingers hover anxiously over what should be taboo words in this business. Yet the cooler substitutes - 'highly desirable ... exemplary' - scarcely do justice to playing of this order." Gramophone

This 200-CD edition is not only the largest project ever undertaken by a recording company in the history of recorded music, but it also marks the first time that all the major recording companies have participated in a project developed by one of their competitors. These partners, EMI Classics, BMG Classics, Deutsche Grammophon, Decca, Sony Classical, Vanguard Classics and Teldec Classics, to mention only a few, are among the greatest labels in the history of recorded music. We are also honoured that Steinway & Sons has supported this project from the very beginning and has decided to become our official sponsor.

GREAT PIANISTS OF THE 20TH CENTURY is a celebration of great artistry; it is also the result of extensive and careful research on the part of all who have participated in its creation. We trust that it will bring joy as well as enlightenment to generations of music lovers to come in the new millennium.