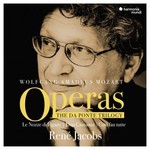 Prima la musica e poi le parole? In his traversal of the Mozart operas with librettos by Da Ponte, René Jacobs has championed an approach which 'contrasts above all with the style that began to determine our listening habits in the first half of the twentieth century.... I am convinced that we must first of all eliminate, or at least clean up, the retouching applied in the nineteenth century in order to allow the original colours to re-emerge', as he explained at the time of the release of Così fan tutte. Whether in terms of his choice of instruments, recitative delivery, or vocal ornamentation, his readings aim to restore to opera buffa and to dramma giocoso their very essence: namely, their theatricality.

This set includes nine CDs plus a data disc featuring PDFs and a realm of additional information.

"If Jacobs is hardly the first modern conductor to present the opera in its 'original colours', his Don Giovanni is among the liveliest and most enjoyable on offer. It is certainly one of the most brilliantly played. The Freiburg band, forwardly balanced, are eager, involved participants in the drama...few could deny the zest, sweep and sheer theatrical charge of this recording." [Don Giovanni] (Gramophone Classical Music Guide)

"Regazzo's brilliant diction and timing put him in the first rank…Pendatchanska's Elvira seemed in each of her appearances like a Fury descending not only on Giovanni, but on all the other characters too." [Don Giovanni] (Opera)

"This new recording from harmonia Mundi is an excellent introduction to the work, and will be welcomed by seasoned collectors, as well. René Jacobs leads Concerto Koln in a stylish, spirited performance.
The entire HM package is a treasure - musically thrilling, intellectually stimulating, and best of all, genuinely entertaining." [Cosi fan Tutte] (Absolute Sound)