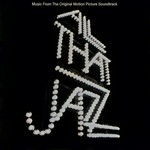 All That Jazz is the 1979 movie, directed by choreographer Bob Fosse, in which he tells his semi-autobiographical life story as the womanizing, drug-using dancer. The music arranged by Ralph Burns won an Academy Award for Best Music and it features "On Broadway" by George Benson which won a Grammy Award for Best Male R&B Vocal Performance in 1979.

The movie stars Roy Scheider as Joe Gideon, the choreographer and dancer attempting to put on a new Broadway show while simultaneously directing a feature film about a stand-up comedian. Using drugs, chain-smoking, sleeping with his dancers leads to an open-heart surgery and he becomes aware of his mortality.

The first pressing of All That Jazz is a limited edition of 1.000 numbered copies on silver vinyl.