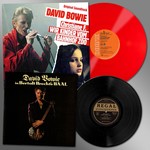 Bowie recorded this EP with Visconti at Hansa Studios in Berlin in November 1981. Recently, all five songs were re-released as part of the exclusive Re:Call 3 compilation that accompanied the boxed set, A New Career In A New Town (1977-1982).

This new limited edition 10" vinyl reissue comes in a six-panel sleeve that replicates the original 1982 packaging and is available exclusively at "brick and mortar" retail stores.

A1. Baal's Hymn (Der Choral Vom Großen Baal) / A2. Remembering Marie A. (Erinnerung An Die Marie A.) / B1. Ballad Of The Adventurers (Die Ballad Von Den Abenteurern) / B2. The Drowned Girl (Vom Ertrunkenen Mädchen) / B3. The Dirty Song