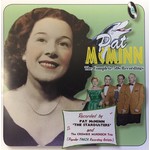 Pat McMinn was a dancer whose voice and personality were perfect for early 1950s pop: she was always in tune and sang with a sprightly delivery and a smile. Pat recorded 29 tracks during her recording career (1950-1956), mostly covers of popular overseas hits including 'This Ol' House', 'Bimbo', 'Dancing In My Socks' and the big Christmas 1954 hit ' I Want A Hippopotamus For Christmas'.

Her biggest hit was 'Opo the Crazy Dolphin', A jaunty tribute to the friendly dolphin that visited Opononi harbour during the previous summer, written by jazz pianist Crombie Murdoch in 1956. It sold 10,000 copies in its first week. Even more than 'Opo', the piece of music for which McMinn is best known is 'Broke My Denture', a jingle for the Geddes Dental Renovation Clinic on Queen Street, Auckland. With Nancy Harrie on piano, and Lee Humphries singing the male part, McMinn recorded the jingle in 1956 while on the way to the annual Musicians' Ball. The jingle - just an hour's work - was still playing on a daily basis 40 years later, but all the musicians received was their original fee of two guineas. McMinn estimated she recorded over 200 jingles. As well as the Geddes ad, this collection also includes three other iconic kiwi ads from Pat: "Taniwha Blue', 'Edmonds Jelly' and 'Hi Diddle Griddle' (a popular Auckland restaurant).

Her last recording coincided with the birth of Rock 'n' Roll in 1956, and was a lively version of the New Orleans R&B hit 'I Hear You Knocking'. After retiring from singing, she continued her interest in dancing. The Variety Artists Club of New Zealand awarded her its prestigious Benny award in 1971, and a scroll of honour in 1993. She received an OBE in 1976. Pat McMinn passed away on 21 March 2018.

Opo, the crazy dolphin
Dancing in my socks
Burn that candle
This ole house
Mr Toe Tap
Crazy Otto Rag
Bimbo
A bushel and a peck
Bell bottom blues
Lets walk that-a-way
If you've got the money I've got the time
Oceana Roll
Just another polka
To old to cut the mustard
Down yonder
I hear you knocking
Somebody stole my Gal
Sweet Thing
Tennessee Wig Walk
The man with the banjo
You'd be surprised with
Twenty little fingers
Dixie Danny
I want a hippopotamus for Christmas
Too fat for the chimney
Charley my boy
Choo'n Gum
Let mother nature have her way
Let's live a little
Assorted Ad jingles