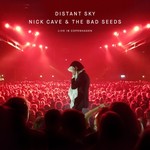 For one night only in April of this year, Nick Cave & The Bad Seeds shared a show from their celebrated 2017 world tour on cinema screens worldwide.

Now, they announce the release of a special EP of audio from that extraordinary show, Distant Sky - Nick Cave & The Bad Seeds Live In Copenhagen, available on 12" vinyl from September 28th.