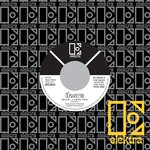 "Hello, I Love You" became the band's second #1 hit when it topped the Billboard singles chart for two weeks beginning on August 3, 1968. Now, exactly 50 years later, Rhino release a new 7" version of the single with its b-side "Love Street."

For this anniversary release, Rhino have used mono radio mixes of the songs that were given exclusively to radio stations for airplay in 1968. This version of "Hello, I Love You" was first available last year as part of The Singles CD collection and is making its vinyl debut here, while the "Love Street" mix is being released commercially for the first time.