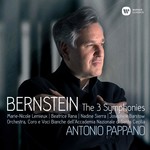 Marking Leonard Bernstein's centenary, Sir Antonio Pappano conducts the American composer's three symphonies and Prelude, Fugue and Riffs. The Orchestra dell'Accademia Nazionale di Santa Cecilia had a long association with Bernstein, who first conducted the orchestra in 1948. "I find these symphonies revelatory in the true sense of the word," says Pappano. "They are hugely emotive and personal … At heart, Lenny was filled with the desire for the brotherhood of man to be something real and concrete … As a great Renaissance man, he was trying to make the world good."

"Let me say straight away that these performances come at us with a theatricality that puts them firmly 'on stage' where they belong...[Barstow] is tremendous and far and away the most exciting, the most affecting, the most probing narrator of any on disc...Pappano's knowledge of, and seeming instinct for, Bernstein's sound world, rhythms and references, is hugely engaging - an excellent modern way of marking the composer's centenary." Gramophone Recording of the Month Sept 2018

"The conductor and his forces relish the stylistic eclecticism of the "Mahlerian" works: none of them conventional structurally, which has been the principal cause of their neglect...These brilliantly executed performances bring his once despised symphonic output into the mainstream." Sunday Times

"Still not well known, these works are widely contrasting in style and far from the Bernstein of West Side Story...[Kaddish is] where Pappano and his top-notch orchestra are particularly successful. With Josephine Barstow as narrator and a crisp, committed performance from the musicians, the work loses that old tendency to embarrass, and gains a natural dignity and joy. This is an invaluable set for anyone wanting to know more of Bernstein's concert works." Observer