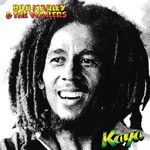 2018 marks the 40th Anniversary of Bob Marley & The Wailers' 'Kaya'. Recorded in part during Marley's and the band's 1977 exile in London, Kaya is very much the sibling record to Exodus.