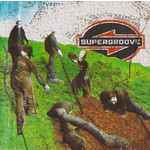 Supergroove burst on to the Auckland live scene at the dawn of the '90 and were responsible for a string of what have gone on to become classic Kiwi anthems. Supergroove generated a staggering 6 Top 10 hits throughout the '90s. Amongst them the gold singles 'Scorpio Girls' and 'Sitting Inside My Head', platinum-selling 'Can't Get Enough' and 'You Gotta Know', live standouts 'Next Time', 'You Freak Me' and 'Here Comes The Supergroove', and many more.

Their kiwi-style hip-hop funk rock songs proved to be very popular. Their debut album 'Traction', released in 1994, shipped Platinum and debuted at #1 on the National Album Charts, holding on to the top spot for over a month. 'Traction' remained in the Top 15 for over 3 months and has now sold well over 5 times platinum.