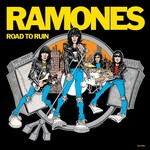 The Ramones released the band's fourth studio album, Road To Ruin, 40 years ago this September. Dee Dee, Joey, and Johnny were joined for the first time by drummer Marky Ramone, who replaced founding member Tommy Ramone, who'd left to do more producing and writing for the band. It was also the album that introduced a nation of pinheads to the all-time Ramones' classic "I Wanna Be Sedated".

Road To Ruin: 40th Anniversary Deluxe Edition contains two different mixes of the album, unissued rough mixes for every album track, and an unreleased 1979 concert recording of the Ramones in New York. It is produced in a limited and numbered edition of 7,500 copies worldwide and comes packaged in a 12 x 12 hardcover book. Along with the music, the set also features rare photos and artwork, including the unused, alternate cover image, plus essays by former New York Rocker writer Roy Trakin, album cover artist John Holmstrom, and Road To Ruin producer Ed Stasium, who details the making of this classic record.

The first disc features a remastered version of the original stereo mix for Road To Ruin and a new 2018 40th Anniversary Road Revisited mix created by Stasium, who strips off the original record's commercial gloss and restores the album to its punk rock core. Stasium's new mix is also featured on the 180-gram LP that accompanies this deluxe edition.

The second disc offers up over twenty unreleased recordings, including rough mixes for every album track, starkly different alternate takes of two songs, and two unreleased outtakes: "I Walk Out" and "S.L.U.G." - unfinished during the original recording sessions in 1978, and completed by Stasium for this anniversary release. Other highlights include three different versions of "I Wanna Be Sedated", including the "Ramones-on-45-Mega-Mix!" released in 1988 as part of the campaign for the Ramones Mania compilation, as well as acoustic versions of "Questioningly", "Needles And Pins", and "Don't Come Close".

The final disc has a previously unreleased recording of the band's entire 1979 New Year's Eve concert, which was mixed live by Stasium, and broadcast on WNEW-FM. Recorded in New York City at The Palladium, with audio sourced from Tommy Ramone's original cassette of the console recording, it features blistering performances of "Blitzkrieg Bop", "Rockaway Beach", and "Sheena Is A Punk Rocker", along with several songs from Road To Ruin: "I Don't Want You", "I Wanna Be Sedated", and "I Wanted Everything".