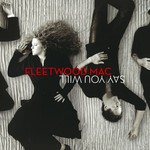 Fleetwood Mac
Say You Will (LP)

The 17th studio album from Fleetwood Mac, Say You Will was originally released in 2003 and was the group's first studio album since the 1995 release of "Time".

Although the majority of the classic '70s line-up returns to the fold here including Stevie Nicks, Lindsey Buckingham, Mick Fleetwood and John McVie, Christine McVie opted out (she does appear as a guest on a few tracks but doesn't contribute as a songwriter).

Say You Will also marks the first appearance of superstar duo Buckingham and Nicks together on a Fleetwood Mac record since 1987's Tango in the Night.