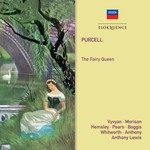 Made during February 1957 in the West Hampstead studios of Decca, this was the first-ever complete recording of The Fairy Queen. Suites and individual dances from Purcell's masque had been played and recorded by chamber and even symphonic ensembles, and songs such as 'One Charming Night' were popular with both English singers and audiences, but Purcell's music was still principally encountered in liturgical contexts, where his anthems and occasionally odes were given solemn and stately performances.

The wit and inventiveness of Purcell as a dramatic composer had been overlooked by the musical public at large, therefore, until Anthony Lewis took on the ambitious task of preparing this recording. He did so as honorary secretary of the Purcell Society, and as a professor of music at the University of Birmingham: both positions which allowed him to explore music of the early Baroque from a practical as well as a scholarly perspective.

The scale of the challenge was outlined by Lewis in the booklet accompanying this new remastering. The complete score comprises 50 separate numbers, deploying a large ensemble of voices and instruments with astonishing freshness and variety to match the quickly changing moods of A Midsummer Night's Dream. However, Lewis was able to prepare the recording in conjunction with a staged performance in Birmingham at the University's Barber Institute. This featured several of the same soloists, and the cast is a distinguished one, thoroughly coached by Lewis in principals of Purcellian style while vocally distinctive in their own right.

Reviews at the time recognised the special value of this first Fairy Queen: most of all for the many delights to be savoured in Purcell's score, but also for the lively conducting of Lewis, the crisp playing of the Boyd Neel Orchestra and the sure and graceful contributions of the soloists. In the English-speaking world, the recording had the field to itself for decades. Benjamin Britten recorded his edition of the masque in 1972: omitting several numbers from Purcell's original, and carrying over from this 'original' cast not only Peter Pears but also Jennifer Vyvyan, who had in the intervening years become a firm favourite at Aldeburgh (this recording is due for reissue in 2018).