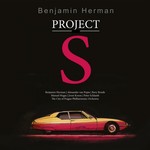 Project S is an ode to the Citroën SM, the legendary car driven most famously in the Netherlands by footballer Johan Cruyff. Benjamin Herman on the new album: "The music for Project S started as a commission for a documentary about this amazing car. The SM is a Citroën with a Maserati engine: an Italian engine in a French car. That's what inspired me to draw on two musicians I really love, saxophonist Fausto Papetti and pop star Serge Gainsbourg."