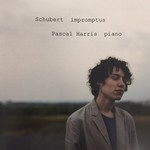 Pascal Harris was born in 1982, in Dunedin, New Zealand into an artistic family. He started playing the piano at the age of eleven. and soon became immersed in music on acquaintance with the works by Bach, Mozart and other great composers. From 2001 to 2005 he studied classics and piano at the University of Otago. During his studies he won several significant New Zealand music prizes including the Simon Gibson Memorial Prize, for outstanding Honours students. After graduating with a First Class Honours degree in Piano Performance under Terence Denis, he continued his studies with Gordon Fergus-Thompson at the Royal College of Music, London.

Fascinated by Japanese culture, he then moved to Tokyo, Japan where he lived as a pianist since 2007. During his time in Tokyo he received kind advice from pianists such as Vladimir Ashkenazy and Jörg Demus. In 2013 he returned to New Zealand.

"New Zealander Pascal Harris recorded these Impromptus in Japan. His performance and recording is delightful. Harris's touch is never heavy and ponderous - there is a lightness and delicacy in these dreamy pieces." Nicholas Butler/Marbecks