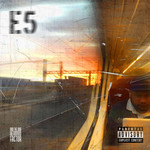 Haz Beats has cemented his name across New Zealand's Hip Hop landscape over the years as in house producer for the politically incorrect and rambunctious Homebrew and Team Dynamite as well as producing for the likes of Lui Tui, Raiza Biza, Wes, HoneBeGood, Dialectrix plus more.

His remixes have been made for esteemed artists such as Fat Freddy's Drop, Aaradhna, David Dallas, Left Projects, Dubious Brothers, Chelsea Jade, Ruby Frost & A Girl Named Mo to name a few. No stranger to the Red Bull Music umbrella, the EP was mixed and mastered at the Red Bull Studios in Auckland.

"E5" is a 6 track instrumental release reflecting on his 3 month journey of Europe mainly spent in the east ends of London. "It's the short journey through public transport fuck ups, come downs, hangovers, the good & bad people I met along the way, to the 35 hours it took for me to get back to Auckland."

Listen to the unique interpretation of Haz's East London experience as he processes the lifestyle, the culture and the world of mixed emotions voyaged in each song till you reach the end of this 5 track journey suitably titled "Home". It's exciting, contemplative, surprising, nostalgic and an impressive way to kick start the The Headnod Factor series. If you're into soulful beats that simmer in a hotpot of J Dilla, Oddisee and Madlib ingredients, then this will appease your appetite, leaving you satisfied for the next instalment.