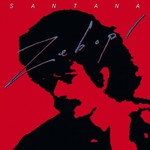 Zebop! Is the eleventh studio album by Santana. Frontman Carlos Santana reentered the pop/rock world after his jazz-flavored The Swing of Delight together with Herbie Hancock. Santana does a great job at covering Russ Ballard's "Winning" an including his famous Latino sound on tracks like "E Papa Re" and "American Gypsy". Production wise, everything shines on this album, but what makes it really great is the way it was performed. The stunning creativity and timeless musicianship is striking in the guitar and keyboard sounds. "Tales of Kilimanjaro" has all the trademark percussion and a jazz-rock vibe, a real Santana classic.

Santana gained public attention by appearing at the Woodstock festival in 1969. The Latin influence has always been an important part in their music, although the band also created some blues rock and pop classics. Even after all those years Carlos Santana is still actively performing.

Side B
1. Tales Of Kilimanjaro
2. The Sensitive Kind
3. American Gypsy
4. I Love You Much Too Much
5. Brightest Star
6. Hannibal