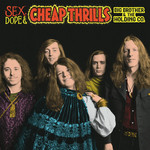 2018 marks the 50th anniversary of Big Brother & The Holding Company's iconic second studio album and major label debut Cheap Thrills, which featured and introduced the world to one of the most recognizable female vocalists in rock history, Janis Joplin.

To commemorate this anniversary, Legacy will be releasing Sex, Dope and Cheap Thrills - named after the originally intended title for the 1968 album which was rejected by the label for being too controversial for the time.