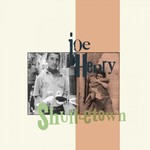 The American singer-songwriter Joe Henry is a welcome guest in the country folk scene. His all-acoustic third album Shuffletown is a laid-back album with a lot of slow and timeless songs. The interesting part is the instrumentation, with stand-up bass, vibraphone and accordion, among others. The album is produced by the Americana star T-Bone Burnett and was recorded over 4 days. It's one of the many masterpieces Joe recorded, and one with a warm tone and some incredible lyrics.

Joe Henry started his musical career by performing in local music venues. After releasing his first album "Talk of Heaven" in 1986 he earned his first contract at a big label. Later on he went on releasing more impressive titles in his own alt-country style.

Side B
1. Land
2. Johnny The Conqueror
3. Drowning In The River Half Laughing
4. Charlevoix
5. Make The World Go Away
6. Ben Turpin In The Army