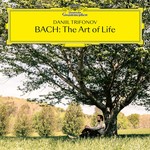 Daniil Trifonov's new Deutsche Grammophon solo recording, Bach - The Art of Life, is centred around Johann Sebastian Bach's late masterpiece The Art of Fugue. The new double album reflects Trifonov's insight into the family life and music-making of one of the greatest composers of all time. Works by four of Johann Sebastian's sons, as well as two pieces known to have been Bach family favourites are also included in a programme taking in everything from lighthearted dance-like pieces to the mournful majesty of the Chaconne in D minor. Already renowned for his recordings of the Romantic repertoire, Daniil Trifonov brings the same magical combination of vitality, sensitivity and flawless technical command to these works of an earlier age.

"We don't normally associate Daniil Trifonov with Bach, so this recording is a revelation…Many pianists radiate effort in their attempts to make intellectual sense of The Art of Fugue: Trifonov's approach seems effortless, at once incisive and tender, purveying pure pleasure from start to finish." BBC Music Instrumental Choice Christmas 2021

"The album's centerpiece, the Art of Fugue, does not disappoint, as we are introduced to a diverse array of personalities. Contrapunctus I, for instance, is marked by a solemnity that yet doesn't dwell....Trifonov brings out the themes clearly, there is more of a panoramic objectivity in his playing: the briskness, when combined with fluidity and a velvety tone, lets us hear how seamlessly all the voices work together." TheClassicReview