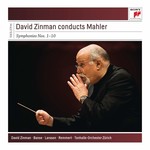 In recent decades, the outstanding American conductor David Zinman has elevated Zurich s venerable Tonhalle Orchestra into one of the world s elite ensembles. Their complete set of the Beethoven symphonies has achieved benchmark status, and the complete Zinman/Tonhalle Mahler cycle, reissued here, has also been widely acclaimed. This is not Mahler for head bangers or hifi freaks, wrote MusicWeb International, although this set is definitely in the demonstration class because Zinman never loses sight of the music s architecture, of the balance between Mahler at his most intimate and at his most extrovert. Reviewing the Third Symphony, ClassicsToday declared: This is pretty sensational ... Zinman reveals himself here as a fearless Mahlerian who stands with the best.

"Zinman's Mahler never peaks too soon, never shows all its emotional cards too early, that that confidence to keep something in reserve as long as possible pays dividends in the second part...Both solo and choral singing are consistently good...but it's the measured, musical nous of Zinman's conducting that really deserves the spotlight." The Guardian, 22nd April 2010 **** [No 8]

"the intensity and beauty of the string sound in the long orchestral introduction to Part II is vintage Mahler in Zinman's loving, but never self-indulgent, hands... it's clear he remains one of the world's most inquiring senior maestros, looking for fresh perspectives. In his Mahler cycle, he has certainly found those." Sunday Times, 25th April 2010 [No 8]

"David Zinman has achieved what is rarely achieved by a conductor: his own sound, soft strings, warm and reduced winds that suddenly burst with exaltation, wonderful percussion - all is one cosmos, follows one idea, the intense search for emotions." - Welt am Sonntag [No 1]

"…David Zinman…opts to illuminate the complex web of contrapuntal lines that straddle each movement while at the same time underlining the composer's profound relationship to this symphonic predecessors. Thus the scherzo… has an impressive Brucknerian gravitas rather than the more manic or grotesque urgency favoured by some other interpreters." BBC Music Magazine, July 2009 **** [No 6]

"[Zinman] draws a rich, burnished sound from his superb Zurich orchestra. There's no doubting their concentration and conviction, or the quality of the individual players (some beautifully shaped woodwind solos, for instance)" International Record Review [No 10]