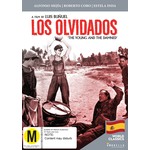 A masterpiece from Luis Buñuel, the great surrealist director of Un Chien Andalou and Belle de Jour.The best known film of Buñuel's Mexican period, Los Olvidados (The Young and the Damned) looks unflinchingly at life in a Mexico City slum. A group of juvenile delinquents live a violent, crime-filled life. At the center of the story is Pedro, a young boy who struggles to be good and Jaibo, a charismatic, ruthless older boy recently released from juvenile detention. Jaibo seeks revenge on Julian, who he suspects informed on him. When the consequences are murder, Pedro tries desperately to free himself from the gang.Full of offbeat images and symbolism, Buñuel mixes realism and surrealism in what is not only one of his most powerful films but also one of the greatest and most heart-wrenching about poverty and childhood.