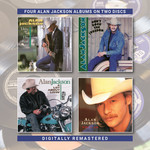 Four huge country albums from multi-talented Jackson. Released originally on Arista in 1990, 1991, 1992 and 1994, these albums smashed the country and pop charts with the first three spending over four and three years respectively on the US Country Albums chart!

HERE IN THE REAL WORLD

A LOT ABOUT LIVIN' (AND A LITTLE 'BOUT LOVE)