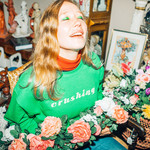 The second full-length album from Australian singer/songwriter Julia Jacklin, Crushing embodies every possible meaning of its title word. It's an album formed from sheer intensity of feeling, an in-the-moment narrative of heartbreak and infatuation. And with her storytelling centered on bodies and crossed boundaries and smothering closeness, Crushing reveals how our physical experience of the world shapes and sometimes distorts our inner lives.

"This album came from spending two years touring and being in a relationship, and feeling like I never had any space of my own," says the Melbourne-based artist. "For a long time I felt like my head was full of fear and my body was just this functional thing that carried me from point A to B, and writing these songs was like rejoining the two."

Throughout Crushing, a sense of confidence manifests in one of the most essential elements of the album: the captivating strength of Jacklin's lyrics. Not only proof of her ingenuity and artistic generosity, Jacklin's uncompromising specificity and infinitely unpredictable turns of phrase ultimately spring from a certain self-possession in the songwriting process.

"As I was making this album there was sort of a slow loosening of pressure on myself," Jacklin says. "There've been some big life changes for me over the last few years, and I just found it too tiring to try to cover things up with a lot of metaphors and word trickery. I just wanted to lay it all out there and trust that, especially at such a tense moment in time, other people might want to hear a little vulnerability."