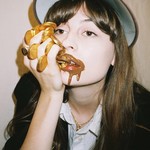 On Atlanta Millionaires Club, the omnipresence of pedal steel eschews bluegrass trappings, flexible under Faye Webster's genre-bending direction. Webster didn't set out to make her new album sound like any artist in particular - in fact, she says the recording process was the opposite, trying to avoid sounding like any contemporaries - but she cites Aaliyah as her main musical inspiration for how she uses sound.

Pulling from a familial lineage of folk storytelling and time spent in Atlanta's hip-hop scene, Webster's work is a study of duality, weaving through her own introversion and heartbreak; it's an idiosyncratic sadness punctuated by fleeting observations and an unexpected, sly sense of humour.

Across Atlanta Millionaires Club, Webster's feather-light vocals unfurl like a sigh, her voice and slinking hues of sleepy R&B acting as sonic through-lines on an album stitched together by intimate songwriting about lonesomeness despite Webster's connection to a larger community. Opener "Room Temperature" recounts Webster's day-to-day life, a study of introversion, of trying to be at peace with being alone. A rattling bass line and the fleeting twang of pedal steel simmer beneath her wispy vocals, a wondering refrain: "I should get out more."

Side A:
Room Temperature
Right Side Of My Neck
Hurts Me Too
Pigeon
Jonny

Side B:
Kingston
Come To Atlanta
What Used To Be Mine
Flowers
Jonny (Reprise)