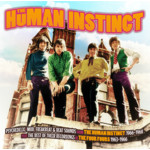 25 tracks, lavishly packaged with a 20 page in-depth booklet which brings to life for the first time the exciting story of The Four Fours and the early incarnation of The Human Instinct in New Zealand and the UK.

"A great journey in sound - one undertaken by a New Zealand group who spent the second half of the
60s with a new name, and recording in London too! A raw group with a sound that was maybe a bit
influenced by the Brit Invasion era, but often carried off with a grittier, garagier vibe - one that offsets the
more melodic moments with a nice sort of edge, and really keeps things interesting as the set unfolds
The set then features later work by The Human Instinct - the new name for the group as they hit the British scene, where they recorded with a bit more psych in the mix. Later Human Instinct material has been reissued, but this is the first time the early side of their career has gotten its full due." - Dusty Groove

How Is The Air Up There? 80 Mod, Soul, RnB & Freakbeat Nuggets From Down Under
more suggestions…