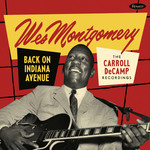 On the DeCamp recordings, Montgomery is heard in full flight in a variety of settings - piano quartets, organ trios, sextets, and drummer-less Nat "King" Cole-style trios. Though DeCamp made no notes on the personnel, dedicated research and listening by Porter and the late musician and educator David Baker suggests that the players included such close associates as Montgomery's brother Buddy, the guitarist's longtime organist Melvin Rhyne, pianist John Bunch, and even the legendary Indianapolis-born pianist Carl Perkins just to name a few.

The 22 selections on Back on Indiana Avenue include embryonic versions of several of the numbers Montgomery would record at his early sessions for Riverside, including "Round Midnight," "Jingles," "Whisper Not," "The End of a Love Affair," "Ecaroh," "West Coast Blues," "Four On Six," "Mister Walker," "Tune-Up," and "Sandu."