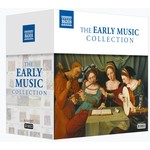 The Early Music Collection is a wide-ranging survey that traces the history of Western music from plain chant, the music of the Catholic Church, through polyphony, to the end of the 17th century. It includes leading ensembles and instrumentalists.

Many of the individual albums have been critically lauded. Recent years have brought a vast expansion in our understanding and knowledge of early music periods. There has been investigation into the repertoire and techniques of other ages, coupled with a movement that has favored the use of instruments and ways of playing them that are more or less authentic.

Even where surviving historical instruments or modern reproductions of them are not used, the styles of performance have been influenced. Above all the myth of unending progress has been abandoned in favor of an evaluation of each period and type of music on its own terms. Early Music, in fact, has become a flourishing industry, stimulated by the remarkable growth in production and distribution of early music. For our present purposes we limit the term Early Music to cover a period ranging from plainchant to the end of the 17th century.

The period that followed, the age of Bach and Handel and the great synthesis of the Late Baroque, is generally more familiar to listeners and is, in any case, another story.

"A whopping 30-disc set that provides an essential starting point for anyone wishing to hone their understanding of the genre…The accompanying booklet itself offers concise and clear detail, as well as a really useful timeline of composers and parallel historical detail." BBC Music

CD 1
Adorate Deum: Gregorian Chant from the Proper of the Mass

CD 3
Music of the Troubadours

CD 4
Neidhart - A Minnesinger and his 'Vale of Tears'

CD 10
Music from the Eton Choirbook