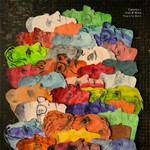 Calexico and Iron & Wine first made an artistic connection with 'In the Reins', the 2005 EP that brought Sam Beam, Joey Burns and John Convertino together. The acclaimed collaboration introduced both acts to wider audiences and broadened Beam's artistic horizons, but it was the shared experience of touring together in the tradition of Bob Dylan's "Rolling Thunder Revue" that cemented their bond. Their metaphorical roads diverged in the years that followed, but they kept in touch and cross-pollinated where they could. But although they often talked about rekindling their collaboration in the studio and on the stage, it wasn't until last year that their schedules aligned.

Beam, Burns and Convertino reconvened in Nashville for four days of recording in December 2018. Nobody was keen to retread old ground. The change of venue - from Calexico's home base of Tucson, where In the Reins was tracked - was one part of the effort. Together with Niehaus, veteran Calexico trumpet player Jacob Valenzuela and frequent Beam cohorts Rob Burger (Tin Hat Trio) on piano and Sebastian Steinberg (Soul Coughing, Fiona Apple) on bass, they settled in at the Sound Emporium, a fabled studio founded in the sixties by Cowboy Jack Clement and the site of countless landmark sessions in country and rock over the ensuing decades.