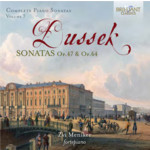 The continuation of an exciting new project: the recording of the complete piano sonatas by Dussek!

Johann Ladislaus Dussek (1760-1812) was born in rural Bohemia. He led a restless life, travelling Europe as a keyboard virtuoso and settling in several European capitals, notably Paris and London, where he became a fashionable pianist and teacher.

Dussek's style is rich, harmonically expressive and pianistically challenging, Classicism on the brink of Early Romanticism.

This new recording contains the two sonatas Op.47, works published in London and in the style of the "Sonata Facile", pleasant works aimed for the aspiring amateur. Also included is the grand sonata Op.64, one of the most substantial and complicated sonatas, called "Retour a Paris", presenting the impressions of the composer after his return to the French capital in 1807.

Zvi Meniker, born in Moscow but raised in Israel, had lessons with Nikolaus Harnoncourt and Malcolm Bilson. As a soloists he played with important Early Music groups like Concerto Köln, Il Gardellino and Musica Antiqua Köln.