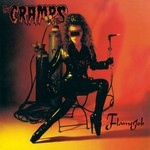 Featuring wild vocals from Lux Interior and creepy guitar work from Poison Ivy, Flamejob centres on the subjects of sex, drugs and rock 'n roll. The most famous cover featured on the album is "Route 66", which is infused with the famous Cramps sound.