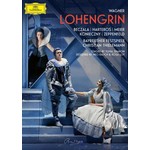 After Tristan und Isolde (2016), Parsifal (2017) and Die Meistersinger von Nürnberg (2018) this is the fourth installment of the exclusive, multiyear partnership between Deutsche Grammophon and the Bayreuth Festival, in which the Yellow Label is the exclusive audiovisual partner of the mythical Wagner festival, releasing each edition's new production on DVD/Blu-ray.

This year, we are proud to release on DVD/Blu-ray the celebrated production of Lohengrin which was premiered on 25 July 2018, featuring an illustrious cast including Piotr Beczala and Anja Harteros in their house debuts, as well as the acclaimed return of Waltraud Meier to the Bayreuth Festival.