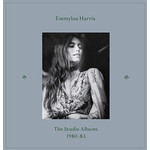 Emmylou Harris The Studio Albums 1980 - 1983 collects five of her albums in a single box set: Roses In The Snow, Evangeline, Cimarron, Last Date and White Shoes. All in, it features 54 songs, including ten Top 10 singles. Emmylou received five Grammys for various repertoire on the enclosed albums. It is the compendium to her first box set released two years ago on Record Store Day.

White Shoes (1983)
I1 Drivin' Wheel
I2 Pledging My Love
I3 In My Dreams
I4 White Shoes
I5 On The Radio
J1 It's Only Rock 'N Roll
J2 Diamonds Are A Girl's Best Friend
J3 Good News
J4 Baby, Better Start Turnin' 'Em Down
J5 Like An Old Fashioned Waltz