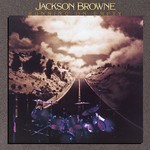 Together, they recorded these songs in natural settings, such as a Holiday Inn hotel room, a backstage rehearsal space, on a tour bus, and on stage.