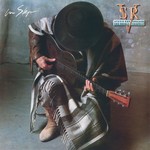 In honour of it's 30th anniversary, Stevie Ray Vaughan's In Step is issued on limited silver-black swirl vinyl!

Originally release in 1989, the Grammy Award Winning album In Step was Stevie Ray Vaughan and Double Trouble's fourth studio album. Stevie Ray had recently become sober, after years of drug and alcohol abuse and this is a recurring theme on the album.

Unfortunately In Step proved to be Stevie Rays last album with Double Trouble before his untimely death, caused by a helicopter crash, in 1990.

In Step is now available on silver-black swirl vinyl!

A1. The House Is Rockin'
A2. Crossfire
A3. Tightrope
A4. Let Me Love You Baby
A5. Leave My Girl Alone
A6. Travis Walk
B1. Wall Of Denial
B2. Scratch-N-Sniff
B3. Love Me Darlin'
B4. Riviera Paradise