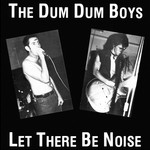 The Dum Dum Boys
Let There Be Noise (LP)

The Dum Dum Boys' Let There Be Noise (1981) is chock-full of James Williamson and Deniz Tek riffage; it also contains elements of Iggy Pop's nihilism.

As the title suggests, Let There Be Noise is anything but a record incessantly focused on introspective doom and gloom. 'Don't Be A Bitch' rivals Radio Birdman's 'I-94' for lyrical thick-headedness- like sticking a hot 454 in a Ford Falcon gasser, the song's simultaneously awesome and dumb. That's a difficult balance to strike.

Let There Be Noise (1981) was self-released and copies quickly became damn near unobtainable, even in New Zealand. In The Red has performed a major service by reissuing this obscure and outstanding record.