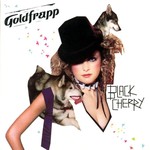 Originally released in April 2003, Black Cherry is available on vinyl once again after being out of print for many years.

Black Cherry was the follow up to Alison Goldfrapp and Will Gregory's debut, Felt Mountain, and gave them their first Top 20 album release in the UK and a Brit Award nomination the following year.