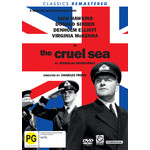 Despite his guilt over a recent harrowing sea battle in which many of his men were lost, Lieutenant Commander George Ericson (Jack Hawkins) is assigned to helm the new H.M.S. Compass Rose with the help of steadfast seaman Lieutenant Lockhart (Donald Sinden). When the small vessel is sent to escort convoys of ships fighting German U-boats in the North Atlantic, the mettle of the novice crew is tested by the weather, the turbulent sea and enemy attacks--one of which nearly destroys the Compass Rose.