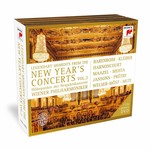 For millions of music lovers the world over, no New Year's Day celebration would be complete without enjoying the annual concert of Strauss Family waltzes and other 19th-century Viennese bonbons which the Vienna Philharmonic has given in the Golden Hall of the Musikverein every January 1 since 1941, and which, thanks to global radio and television broadcasts, was shared this year (2014) with audiences in over 90 countries. Following on from the 2011 release of Legendary Moments from the New Year's Concerts, Sony Classical's new x3 CD / x1 DVD compilation Legendary Moments from the New Year's Concerts Vol. 2 surveys the past quarter-century of New Year's Concerts, stretching from Carlos Kleiber's legendary first appearance at the event in 1989 to Daniel Barenboim's return to the rostrum this year (2014) to preside over the orchestra's 74th annual New Year's Concert.

"Here is music and music-making in which elegance, dash and lightness of spirit sit side by side with pools of emotional quiet which can haunt the mind for days to come" Gramophone