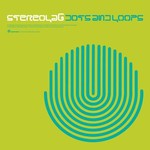 $72.00 In stock with supplier
ETA: 4-7 business days add to cart more by this artist

In a way, it's apt that Dots and Loops has lived on in the cultural memory on account of Parsec being used in an advert for Volkswagen Beetles. This album contains some of Stereolab's most precision engineered music - a result, perhaps, of the contributions Mouse On Mars' Jan St. Werner made to the record. Though there are still instances where Stereolab allow their hypnagogic blend of krautrock, yé-yé and bossa nova to drift into the ether, generally the instrumentals here are bolted together more tightly than they were on Dots and Loops' predecessor Emperor Tomato Ketchup. This allowed the band to incorporate dance music influences more readily than they had previously - breakbeats crop up on several tracks here while closer Contronatura approaches disco.