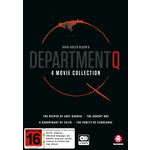 All four films from the hit Danis Nordic Noir series Departmet Q. Based on the best-selling novels by Jussi Adler Olsen all four films have been packaged together in one box set.

The Absent One: Twenty years later, a supposedly solved double murder case lands on the desk of brilliant detective Carl Mørck in Department Q, and he quickly realises that something is terribly wrong.

A Conspiracy Of Faith: When a literal message in a bottle - scribed in blood and dated 8 years earlier - washes up off the coast of Jutland, the haunted Carl Morck and his good-natured assistant, Assad, are drawn into the investigation of a serial killer intent on destroying faith as well as lives.

The Purity Of Vengeance: Two workmen make an alarming discovery in an older Copenhagen apartment: hidden behind a false wall are three mummified corpses, sitting around a dining table with one empty seat left.