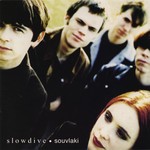 The package includes an insert and the cover jacket has a special alubrush finish.

SIDE B
1. Souvlaki Space Station
2. When The Sun Hits
3. Altogether
4. Melon Yellow
5. Dagger