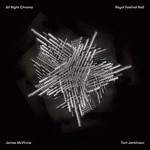 · James McVinnie is one of contemporary classical music's preeminent organists. His work as a performer encompasses music from the 16th century to the present day. He's collaborated with many leading artists from across the musical spectrum including Bryce Dessner (The National), Philip Glass, Nico Muhly (Bedroom Community), Richard Reed Parry (Arcade Fire) and also artists across Warp's roster such as Darkstar and Oneohtrix Point Never.

· Tom Jenkinson is an equally impressive figure. You'll know him as Squarepusher, or perhaps through his work leading the band Shobaleader One, but Jenkinson also has some serious chops as an arranger and composer - he's had his orchestral works performed at venues like London's Royal Festival Hall.

· It features eight breathtaking performances recorded over one night in 2016 on the extraordinary and much-admired Harrison & Harrison pipe organ at the Royal Festival Hall.

· All Night Chroma further showcases the breadth of Tom Jenkinson's talent away from the electronic sounds that form the basis of his work as Squarepusher.