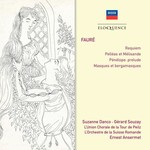 Contrary to the imaginative view offered by many commentators, Fauré's Requiem had nothing to do with the death of Fauré's parents. 'My Requiem was written for nothing,' the composer confided to Maurice Emmanuel, 'it was written, if I may say so, for fun.' Ernest Ansermet recorded the piece with two stellar artists - Suzanne Danco and Gérard Souzay - whose stylistic solos are completely in keeping with the music's sentiments. Ansermet also recorded three of Fauré's orchestral works for Decca in 1961, originally coupled with Debussy's Petite Suite. They are included on this anthology, thereby presenting the sum of Ansermet's Fauré recordings for Decca. Previously issued on Decca's 'Classic Sound' series, the CD will be welcomed back into circulation by many collectors and the cover reproduces the original illustration used on the Decca LP of the orchestral works.

'Gerard Souzay sings the baritone part most beautifully and for this, and for Ansermet's grave and distinguished treatment of the lovely work, the reissuse is most welcome' … 'In almost every respect an ideal performance' (Requiem) Gramophone

'Ansermet's version [of the Requiem] is technically immaculate' … 'sympathetic and stylish performances [of the orchestral works], highly regarded in their day and still sounding well' Penguin Guide to Bargain Compact Discs