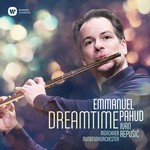 Dreamtime is a spellbinding collection of works for flute and orchestra which, in Emmanuel Pahud's words "expresses and gives form to the composers' most personal, spiritual or dreamlike visions". The album ranges wide both culturally and chronologically, embracing works by Mozart, Reinecke, Busoni, Takemitsu and Penderecki, and inhabits a dimension "populated by incantations and prayers, in which imagination is woven together and then unravels, and where desire is roused by fantasy". Pahud is partnered by the Munich Radio Orchestra and its Principal Conductor, Ivan Repušić

"This album's title, 'Dreamtime', suggests a programme of quiet listening - a slew of soothing adagios, perhaps - but it's actually nothing of the sort...Whether Mozart had a 'Romantic vision' for his Andante is debatable but Pahud's sweetly expressive and quite leisurely reading is certainly evocative...the Munich Radio Orchestra, who play with character and commitment under Ivan Repušić" Gramophone Feb 2020

"I recall being struck, simply enraptured by Pahud's recording Solo of 2018. Now here I am again, with Pahud's 2019 album Dreamtime. What is it? He plays so magnificently, for one. Then there is his repertoire, always with an interesting programme. The two major works, underperformed concertos by Penderecki and Reinecke, are simply wonderful" Nicholas Butler/Marbecks