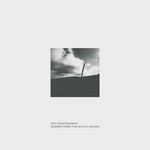 Montgomery's own memories of this era conjure it vividly:

"Several elements converged or aligned for the making of Scenes From The South Island in late 1994, early 1995. Landing in San Francisco where things felt different but the same. The play of light, the odd ornamental pohutakawa or ti kouka sprouted from tiny front yards and waving silently at me in this neighbourhood or that. The wind. A room with basic recording equipment up on Sunset, the kind of which I had seen before many times in flats or houses in my city. Patches of the American landscape viewed from the road or trodden lightly upon that still seemed as unpeopled as home and rightly so. Time off to remember. Time off to try to forget. A cheap electric guitar waiting for me in a pawn shop in Chicago. Thoughts about good places to die both here and there. The land talking to me. The dead talking to me. Spirit guides. Pathways in the brain. Luck. Another room on the other side of the continent on the Lower East Side with almost the exact same set-up for recording. A few good friends. Solitude. Anonymity. Despair. Solace built from sound. Making new spaces by going back. Stepping in the same river time and time again."